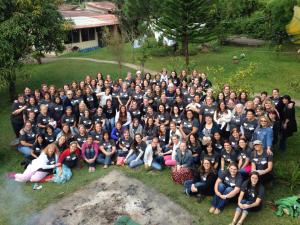 This past weekend I attended a four day Women of purpose retreat for the missionary women here in Honduras. It was hosted by some amazing American women who come to Valle de Angeles once a year to put this incredible retreat on for us. It was a weekend full of spoiling. The first evening began with pampering; pedicures, manicures and hair. Chocolate was flowing all weekend long. There was also a craft station set up for those who were so inclined. I actually made three items that my children will receive for Christmas. There were also gifts; necklaces, a book called I want God and a Revive t shirt.

The worship was amazing as always and it was a great time of being renewed, refreshed and revivied in my spirit.

It was wonderful being able to reconnect with friends that I don’t see all the time, as well meeting new people and making new friends. During the retreat, the Women of faith conference was also going on at the same time. They were able to live stream some of the services and we were blessed with sermons by Christine Caine, Sheila Walsh, and Lisa Terkeurst and the hilarious Patsy Clairmont.

We heard a heart wrenching testimony that spoke to my heart in a huge way of a young woman named Veronica who’s “what if “became “what was.” Her greatest fear had become an unimaginable reality. Yet even then, she chose to love the Lord even though she was completely and utterly broken.

We are weak and broken people. God wants to use the broken pieces of our life to help others through that….Steve Cunningham, husband of Veronica.

Habakkuk 3:17-19
“Even though the fig trees have no blossoms, and there are no grapes on the vines; even though the olive crop fails, and the fields lie empty and barren, even though the flocks die in the fields, and the cattle barns are empty, yet I will rejoice in the Lord! I will be joyful in the God of my salvation! The sovereign Lord is my strength! He makes me as surefooted as a deer, able to tread upon the heights”

Lately there has been a recurring theme that I have been hearing lately. At church, home group, my devotions and even on the retreat. That is not allowing your past history to dictate your future. The past isn’t who I am today. I don’t need to allow things that happened years and years ago, affect my life today. God opened my eyes to some things that happened early on in our ministry that were still hanging on in a way. People that I needed to forgive and things I need to let go. Things I thought I had forgotten but deep down there was unforgiveness in my heart. I was still walking around wounded by events in the past.

I had a dream that one night that I was walking down a lonely road, all by myself, and I was lugging all these suitcases behind me. I felt like God was saying that not only am I not meant to carry them alone…I don’t need to carry them at all. Because he wants me to be free from the past, and not bring all that baggage into my life today.

All in all the retreat was amazing! Best weekend of the year so far. I was unable to enjoy all of it because I ended up getting really sick….but even in that there were blessings.
It happened at the retreat where there was a nurse who made sure I got to the hospital. Honeslty I probably would not have gone….and that would have been bad! There was a woman at the retreat who’s dad was a Dr. and he happened to know the best gastrointestinal Dr. in the country. She was able to connect me to him. I was admitted immediately. No waiting around forever in a waiting room. I had my first scope within minutes of arriving. And although my stay in the hospital was longer than I wanted, I had the best of care at the hospital, and had was able to get the rest that was needed.
Lamentations 3:23
Great is his faithfulness; his mercies begin afresh each morning.

Imagine my shock and hurt when I read on a Facebook status that my mom has breast cancer. The very thing I was told days before, she did not have. The same thing I told the home group we are a part of, in a praise report that my mom did not have. Now all of a sudden I learn that was not the right report. Wrong test, wrong information. It was devastating to have found out on social media rather than a phone call. I understand now that misunderstandings happen. The one who posted it thought I had already been called, thought that I knew and thought it was ok to share with everyone the need for prayer. And maybe, when one receives shattering news like that, the first response is to reach out in desperation to others for prayer and a shoulder to cry on. The need to tell someone. The need for God to step in and do something.
I guess it is always something that is in the back of the mind when a loved one gets sick. Thoughts like; if we are going to die of something it will probably be cancer. I know; how positive, right? The reason is that cancer runs in my family. Both sides. My dad had cancer of the appendix a number of years ago, and my mom has lost siblings to the horrible disease. In the case of them all, except my dad who was healed…it eventually took their life. I guess that is why my mind goes there.

It’s hard being so far away at a time like this. My heart is with my mom and I want to be there for her when she goes to see the doctor on Monday to discuss what the next steps are. But I can’t, and I feel kind of hepless because of it. Thankfully though, we do have a majicjack phone and as long as our internet is working, I can call and talk to her for free. And also there is Skype.

The good news is..(if there can be good news as far as cancer goes) that they caught it in its early stages and they say it hasn’t spread. That does bring a certain amount of comfort….that this actually may end up ok. Part of me worries though that my mom is in her late seventies and not exactly young anymore. She is in good health other than this. She eats right and she is active. When she was here in Honduras she walked with me on my usual trail…and there are hills and and stairs to climb on the route I take. A lot of people her age can barely get around or are in a nursing home, but she has energy to spare and still keeps her home spotless and manages to put amazing healthy meals on the table.

In all this she does not seem to be too worried. She is trusting in the Lord. She has an attitude of thankfulness in this. Although she did mention to me that she was a little worried her hair would fall out and that when it grew back in it would grow back in white! Isn’t that precious? It made me laugh, because I thought that at her age it is ok to have white hair! She has earned it.

Anyway, please my sweet mom in your thoughts and prayers. For her healing; for strength and energy and that she would keep her positve outlook. Pray that discouragement would not find its way into her heart. I know God has this. She is his daughter. He is giving her peace of mind and peace in her heart and she is doing ok. She knows who holds her future and is not afraid.

I feel at peace right now; even though geographically I am so far away from her. This isn’t to say I have not cried about this…because I have! It’s not to say I have not thought at one time or another, what if this is it…? I have. This is my mom. I think it is natural to feel sad and cry and worry when given news that someone we love has cancer. Especially when it’s a parent. But, I will be ok, no matter what happens. Because she is in His hands and who’s hands are we better to be in than God’s.

Psalm 139:16
Your eyes saw my unformed body; ALL the days ordained for me were written in your book before one of them came be.

Isaiah 43:2
When you pass though the waters, I will be with you; and when you pass through the rivers, they will not sweep over you. When you walk through the fire, you will not be burned; the flames will not set you ablaze.
Isaiah 53:5
But he was pierced for our transgressions, he was crushed for our iniquities; the punishment that brought us peace was on him, and by his wounds we are healed. 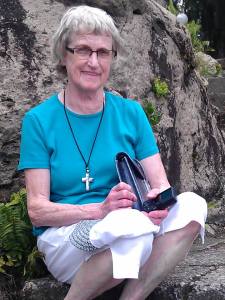